In addition to preferences, methods matter, too. The New York Times’ approach — which concluded Denver is the ideal locale — illustrates a pitfall of “sequential filtering.” With each added restriction, the pool of remaining options shrinks, making choice less taxing. The price, however, is we lose sight of excluded options for the rest of the process.

Amazon identified four specific attributes it valued in a metropolitan location for its HQ2:

Of course, we cannot precisely know Amazon’s preferences across these four attributes. Instead, we will imagine two possible “corporate personas” to illustrate the critical role played by preferences.

Based on these preferences, the fifteen cities with the highest Value Ratings are: 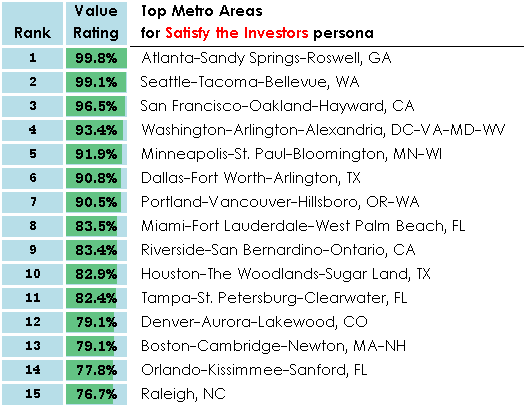 In the second persona, we complete the Preference Survey as if we were an organization seeking to cultivate an urban working/living district that will benefit not only investors but also customers, suppliers, and the community at large. Such an organization’s Preference Profile might look like this:

Based on these preferences, the fifteen cities with the highest Value Ratings are: 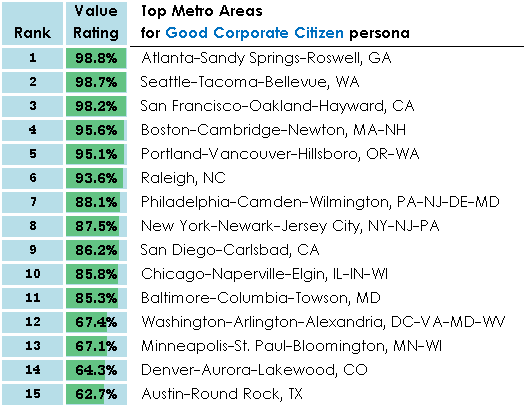 We expect that cities performing strongly across the board would rate highly in any case. We see this for Atlanta and San Francisco. Seattle is included as point of reference because, according to Jeff Bezos, Amazon founder and CEO, “We expect HQ2 to be a full equal to our Seattle headquarters.”

Beginning with 4th place, however, the lists diverge.

Some cities appear only in the Satisfy the Investors list:

Other cities appear only in the Good Corporate Citizen list:

Notice the range of Value Ratings for the top fifteen cities differs in each list. Corporate persona #1 ranges from 76.7% to 99.8%, while persona #2 runs from 62.7% to 98.8%. This suggests that the Preference Profile of persona #2, with the wider range, skews toward attributes for which strong performance is less common.

Finally, some cities appear on both lists, usually in different positions:

To summarize, Value Ratings give a personalized prioritization of all the choices you face. Shortly after Amazon’s announcement, many media outlets presented their evaluations of the deserving cities. These appeals either ignored Amazon’s preferences or presumed to know what they are (or ought to be). As shown above, the pool of better choices is highly dependent on the decision-maker’s preferences.